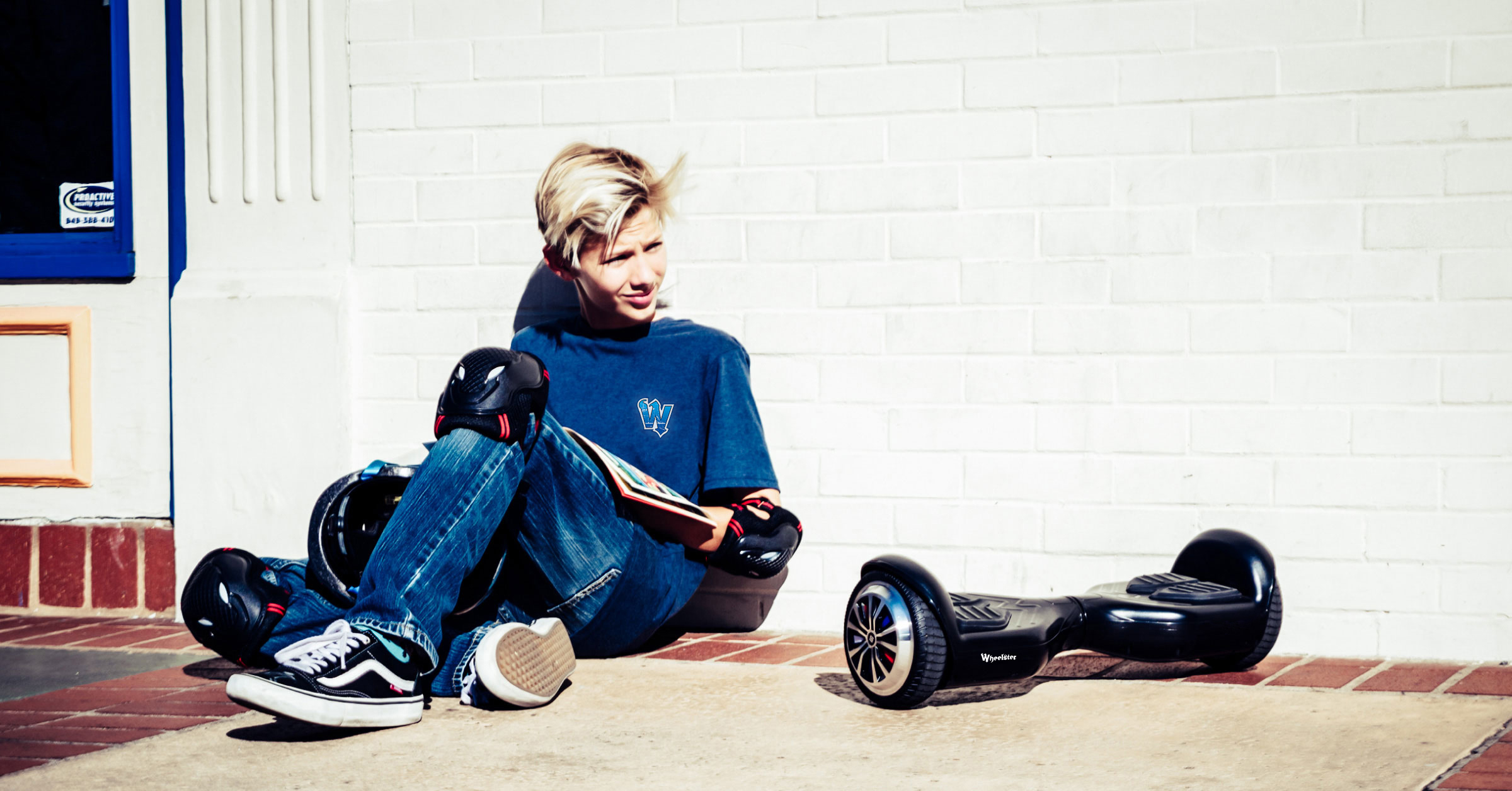 Buy The Best Hoverboard In Canada!

Wheelster is the Hoverboards specialist since 2015, when we imported the first hoverboards in Canada…

THE BEST HOVERBOARD IN CANADA!

The Science Behind The Hoverboard

Today, the hoverboard is widely used, mostly by children, and it is one of the good examples that confirm the theory of Arthur C. A board with two-wheels that moves in the direction we want, without any physical activity, looks like magic. However, in reality, that's not the case. The magic of the hoverboard is in principle a science invented a hundred years ago. The technology is more advanced today, but the main principles on which the hoverboards are based are the same.

Hoverboard represents one of the most famous modern-day inventions because it is very practical. It is excellent for traveling over short distances, and it does not pollute the environment at all. Although they are called hoverboards, they do not actually "hover" above the ground. The platform on which we stand “hovers”, but it is fixed with wheels that drive on the ground. That's why some call them self-balancing scooters, which in general is a much more accurate name.

Before we begin to explain the principles and the way that the hoverboards run, we have to explain how the six axis sensor works. This specific type of sensor, which is an integral part of every hoverboard, consists of an accelerometer and a gyroscope. Each of these sensors contains more sensors embedded in them, so we will explain them all separately in order to be able to understand how the magic of the hoverboard is essentially just science. You can also shop for the best hoverboard in Canada now!

ACCELEROMETERS
The accelerometer is a sensor composed of three separate sensors. It is used to measure the current position of the device in three dimensions according to the Cartesian Coordinates. One sensor determines the forward/reverse position, the other one up/down position, and the third to the left/right position.

Sensors work using variable capacitance. There are two capacitors installed for each of the three dimensions. One of them is fixed and does not move, while the other is allowed to vary its position according to the position of the device. In order to accurately measure the current position, the sensitivity of this type of plates is very high.

So, when the device moves in a given direction, the corresponding plates move as well. The distance between the movable plate and the stationary plate is recorded. Changing the distance causes a difference in capacitance between the plates and thereby, change of the voltage. The voltage is easily measurable, and its value can be monitored and used where needed.

GYROSCOPE
Of all the sensors used in the hoverboard, the most important of them is the gyroscope. Because of him, in addition to the two names (hoverboard and self-balancing scooter), they are often called gyro scooters. The gyroscope serves to measure angular change by the shift of mass within the gyro. As we have said, this science had been invented one hundred years ago, and today it is used in many areas, from navigating air-crafts to cycling.

There are two types of gyroscopes, mechanical and electrical. Both types consist of concentric metal rims with a rotor at the center. The electrical gyroscopes are always used in hoverboards because they are more precise and the information obtained from them are in the form of a “change in voltage”, so it can be easily used without being transformed. Today's modern gyroscopes are so rigid that they can fit in computer chips. They are called micro electro mechanical semiconductors or MEMS. They are mostly used in smartphones, for the automatic rotation of the screen.

The gyroscope works on the principle of Coriolis Effect, which means that whenever mass is moving in a particular direction with a particular velocity and when an external angular velocity is obtained whose axis is vertical to the movement, then a Coriolis force will occur which will be in 90 degrees angle to both, causing vertical displacement of the mass. And of course, the difference in position will cause a difference in capacity, and thus, just like in an accelerometer, a voltage difference that represents a quantifiable value that we can use corresponding to a particular angular rate.

The power of combining accelerometer and gyroscope
Hoverboards could not work without the accelerometer or the gyroscope. With the help of gyroscope, hoverboards can detect their position in relation to the floor, but they don't know if there is any action. Here comes the role of the accelerometer, which measures the movement. These two sensors can be incorporated into a computer chip that allows easy and convenient measurement of the movement in six directions.

By combining the information from the gyroscope and the accelerometer, where one measures the gravitational position and the other measures the motion, it is possible to determine the precise movement of the device, in this case, the hoverboard, in relation to the environment. This data is in the form of electrical signals. They are sent to the software, where they are processed with incredible speed, enabling the device to react in coordination with the environment and our movements.

ELECTRIC MOTORS
Each hoverboard contains two electric motors, one in each wheel. They are the muscle of the device. Electric motors are nothing new in the field of science. They are all around us, from a refrigerator to a washing machine. The electric motors produce a movement with the help of two bar magnets which, when given an electric charge, will attract or repel each other. This causes a circular movement that can be used to power the wheels.

The strength, the horsepower (W), distinguishes the motors. The stronger the engine, the faster the hoverboard. However, the speed of the hoverboard does not depend only on the engine power but also depends on the torque or the efficiency of using that power. For example, a 1kW engine with poorly-made wheels or bearings can be slower than a 0.75kW engine with proper accessory equipment.

These engines, in the hoverboard, are placed within the wheels. They work independently of one another, which means that one can have different speeds from the other in a given time interval, depending on driving needs, and may even have an opposite direction.

LITHIUM BATTERIES
The battery represents the heart of every hoverboard. All electrical devices presenting the future of public transport should be grateful to mobile phones (smartphones) for inventing and upgrading the lithium battery; and in recent years a new type of silicon-based Lithium battery.

The original lead-acid battery is still the most economical, but it requires more space because it is large in size and has a very high weight. Weight reduces motor efficiency, therefore with this type of battery, the use of any means of electric transportation will be difficult to implement.

The main advantage of lithium batteries is that they are portable and lightweight with the ability to deliver a decent charge. Also, charging them is very quick, it takes only a few hours to be fully charged. Some hoverboards allow quick replacement of the battery. If we plan to go on a more extended trip, in that case, we can carry a full spare battery in our backpack, and after spending the original battery, it's effortless to replace it with the backup battery.

SOFTWARE
The software is something that makes the difference between a good hoverboard and a bad hoverboard. Physical parts like the accelerometer, the gyroscope, the electric motor or the battery can be easily purchased at an economical price. They are all similar to each other, and the differences in their specifications are minor. While in the software, the differences are huge and have great significance in coordinating all the work of the hoverboard. Each software is protected and very difficult to copy without resorting to pirating.

Each hoverboard contains a motherboard in itself, where, like any desktop PC, it has a ROM and RAM memory and a processor. The central role has the processor and its computing power. He is responsible for processing the data coming from the sensors in real time and sending torque instructions to the two separate engines. If the software is flawed, or not professionally made, then the relay of information will be slower and less responsive. Another option offered by hoverboard is the training mode, which is also enabled by the software that limits handling responsiveness, acceleration, and power.

The balance and the control of the hoverboard consist of an incredible rapid data exchange between the logic board, sensors, and the two motors. When the gyroscope and the accelerometer register a change of the center of gravity, they send information to the software which processes them and sends information to the electric motors to increase or decrease power, which controls the direction and speed of the wheel movement. The same thing happens when the foot is pressed on the foot panels. The pedal sends information to the software, which is processed and later transmitted to the electric motors. The software, or rather the processor, is the brain of the entire device. Bad software can result in uncoordinated movements of the hoverboard in relation to our instructions.

Now when we know the main components that make up the hoverboard, we can easily make the difference between a mid-hoverboard and a great professional hoverboard. I hope that this article can help you purchase the right hoverboard for you.

WHEELSTER.com® is the official Hoverboard shop and 100% proudly based in Canada since 2015. We DO NOT sell cheap “knockoff” Hoverboards like many online retailers & big surface stores using plastic wheels, under-powered motors and need constant re-calibration. With over 50,000+ satisfied customers our quality speaks for itself and you can be assure you’re getting the best value anywhere. We get tons of positive reviews, we fully test prior to shipment, got the lowest defect rate of the industry and we are approved and certified in Canada. Read 49 Reasons.